I like to think I’ve evolved since writing in 2012, ‘Easter in Sweden: what’s gone wrong and where’. If you haven’t read/remember it, I implore you to give it a go as it’s a quick read and includes lots of swearing – much more than you will ever hear anywhere else on Easter Sunday.

In it, I explored all the issues of what gave/gives me the shits with Swedish Easter and finished with a quick summary of how I was trying to turn things around:

For years now I’ve been trying to compensate for the whole cardboard versus chocolate Easter Egg debacle by importing my own Australian Easter traditions into Sweden. So far I’ve tried introducing hot cross buns, the Easter Hat Parade, a lamington drive, Sydney’s Royal Easter Show and perhaps my most challenging import to date, changing spring into autumn.

At this stage nothing seems to be sticking but I’ll get back to you. 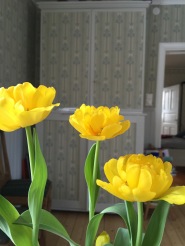 We woke up to a stunning ‘Easter Sunday’ which we celebrate here on Saturday. After spending the past 2 Easters in Australia, the girls were thrilled when they found out that Easter literally comes a day early in the northern hemisphere.

The sun was shining and the snow was sparkling. We walked up to the main cabin to find that the Swedish Easter Rooster had paid a visit to everyone under the age of 18. After the girls culturally adjusted to the Swedish Rooster – the Australian Easter Bunny had been more bountiful in gifts – all was good.

In 2017, I am now a big fan of the Swedish Rooster, with its minimalist thinking towards sugary treats and it’s zero waste tendencies. This morning the girls received their loot in heritage Easter eggs, the same as TSH had a child. Just gorgeous!!!!!

After a morning which included rides on the snow scooter and some Easter crafts, it was time for lunch. Kale soup with egg, accompanied by home-baked baguettes, cheese and ham. For those allergic to the entire grain family (moi), there was Swedish seed crackers on offer. For those that know me, who would have thought that the idea of Kale soup would now sound so good?

Cousin E came in to save the day for those of the family who were adjusting to life in Sweden*. She came up with the idea that we would have an Easter Egg Hunt, with a map and everything. She organised some chocolate eggs and drew up a map of our estate, and we all set off to find the loot. It was awesome! And the kids loved it too.

The main event. My parent-in-laws had prepared everything so wonderfully, but everyone was there to lend a hand. I was in charge of tablescaping. Course. Put my hand up for that one. Considering I’ve been known to serve fish fingers burnt on the outside yet still frozen on the inside, the responsibility of buggering up the food for Easter was too much for me.

We feasted on a smorgasboard – a buffet with many small dishes. Swedish meatballs, Vasterbotten cheese pie, eggs halved and garnished with fish roe or prawns, pickled herring, potatoes, smoked salmon and a selection of hard bread. Ooooooh so good!!!!

So, a big fat nothing has changed about Swedish Easter. 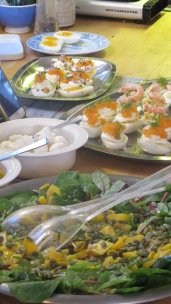 How was your Easter? Have you evolved?

Tags: easter, Easter in Sweden, Sweden, Swedish Easter
From: Living in Sweden, Lou Lou, Swedish celebrations, Swedish food
← After the attack on Stockholm…
Why not? →
4 Comments Post a comment