Last weekend was Swedish midsummer and boy did we put the Swedish into midsummer. Tina Sparkles made the trip up from Malmö and my sister-in-law is here from Sydney, what better way to show off  Sweden’s fascination for dancing around 20 foot penis’s than with an Extreme Swedish Midsummer Celebration! For a bit of a back story clink here.

For our ESMC, we wanted our picnic menu to be something memorable. We decided upon a super Swedish menu but due to work commitments, we handed over the food preparation to the Super Nanny. The super special Swedish recipes were in Swedish, the super nanny speaks English. None of us thought this was a problem and to be quite honest, after being here for only two weeks her Swedish is nearly on par with mine. This is because of our successful method of training: Swedish! Initiation by Fire – welcome to our intensive 4 week course including the full-time care of a 2 yr old who only speaks Swedish. We had presumed the 2yr old, who understands English perfectly, would indeed after a few days, change into partial English. The 2yr old however, prefers the Super Nanny to learn the thousand-year old Swedish language instead. Some days, she feels that just speaking Swedish louder, will help this process. “I WANT ICE-CREAM!” “CAN I WATCH TV?”, “WHERE IS MY DUMMY?”, are all classic Swedish phrases, the Super Nanny now knows. 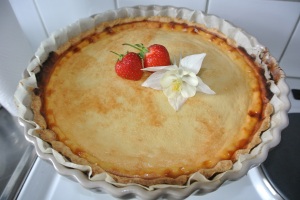 The menu consisted of my mother-in-laws famous Västerbotten’s Pie with red roe and creme fraiche and for dessert, a Lemon and Elderberry pie topped with strawberries.  With two pie crusts to be made, and the recipes all in a foreign language, the lemon/elderberry topping and it’s pie crust had their cooking timings reversed making for delightful, unexpected textures all round. The Super Nanny was very, very apologetic but no one was concerned as the pie turned out just as if I had made it myself! God Bless Her, trying to be so authentic like that.(That is a classic Lou Lou cooking mistake – although I can read Swedish and therefore have no excuse – but I wouldn’t have admitted it and just passed the pie around with a smile.)

As we live in a compact city with well designed public transport infrastructure (we don’t have a car) we popped on the bus and headed south to the idyllic town of Tyresö. The bus was full and a few stops later an elderly women pushed her way on with a pram. The bus swayed around corners and lunged forward, we noted, tut tut, that she wasn’t giving a rats about the baby. Later on, as we all disembarked, we discovered why; the pram was full of beer and not babies. Gee whiz, for such a strong Swedish tradition, people sure were acting like they were Australian.

Complete with its own castle and lake, Tyresö park made the perfect choice for our Extreme Swedish Midsummer celebrations. Everyone else in Stockholm thought so too, so the park was packed with thousands and thousands. And that’s when you can be really happy you live in a land of order and cue ticketing systems. This massive public even was run perfectly, not many ques for anything, rubbish bins a-plenty and someone to sell the kids big helium balloons to keep them happy. 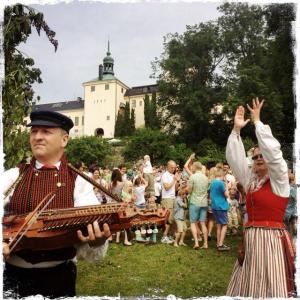 Then, just at the right time, everyone was invited down to add fresh flowers on the big penis before it was raised. After this, talented live musicians played traditional folk instruments and everyone danced around the penis, pretending to be frogs. You can’t make this shit up. But I have to say that when you live here, it does seem like the most natural thing in the whole world to do.

All-in-all it was a ‘golden day’ as my Nanna Burn’s used to say. Simply golden. As golden as the crust on the Lemon and Elderberry pie.

P.S Why do I suddenly have time to blog? Because I was in a park on Tuesday night enjoying time with friends and having a BBQ. I stepped on a fucking Swedish bee and now cannot walk/work due to an infection, so all this talk of lovely outdoorsie Sweden is bullshit. TSH over the years, has assured me that nothing can kill you in Sweden. That bastard. He lied.