One of my most favourite places in Stockholm is the most wonderful Modern Museum. Situated on the easily accessible little island of Skeppsholmen, it houses some of the world’s finest collections of modern art. It also houses what I consider to be, Stockholm’s best brunch. No wonder I like it there. The food is seriously good. Head chef Malin Söderström puts on a fabulous menu and actually, every meal I have ever had there has been fantastic. The restaurant also comes with some of the best views of Stockholm, so this museum really does tick all the cubist boxes.

Recently we discovered ‘Family Sunday’. Each Sunday throughout the spring and autumn, starting at 11, there is a child friendly small tour and mini lecture followed by a get-your-hands-dirty workshop. There are two sessions, one for  2-6 year olds and one for 7-14 year olds. With Bubba at our side, we bought tickets to the 2-6 year old workshop and headed in.

In a group of about 15 little ones with parents in tow, we all walked through the exhibition finally finding our way to the museum’s latest offering by French artist Nicki de Saint Phalle entitled The Girl, The Monster & the Goddess. As I scanned the space, I quickly got a feel for Nicki’s content and theme’s and thought to myself, ‘Geeeee Marie the art historian, courageous move … this is going to be interesting‘.

Nicki de Saint Phalle was a sculptor, artist and film maker whom burst onto the world art scene during the 60’s with her infamous ‘shooting’ paintings. According to the museum’s own literature Nicki was a feminist and her ‘shooting paintings’ were symbol laden compositions that dealt with the vulnerable position of women, while challenging the patriarchy and the legitimizing role of the church in its omnipotence. So far so good. In her artistic oeuvre, Niki de Saint Phalle strove for a poetic order that could help her handle the dark chaos that was a constant companion. Her imagery is playful and spontaneous, but can nevertheless confront us with bottomless pain. UUMMM O.K. In the film ‘Daddy’ we witness when she, as an adult, avenges the sexual abuse she suffered as a child from her father. WOE WOE WOE. BACK IT UP THERE MARIE. You mean, you’ve got a bunch of toddlers sitting at your feet and the most appropriate content you can find at the Museum of Modern Art, deals with the psychological revenges of incest????? My eyebrows went so high up they nearly flew off my head and I believed I looked like many of the women on Real Houswives of Beverly Hills. Of course, she didn’t use language like that but rather, ‘this was done at a time when Niki the artist was very angry at her father and mother‘. BUT STILL. COME ON. As the mini lecture continued, I looked around at the other parents hoping to see equal looks of utter dismay, but alas no, all that I saw was all eyes focussed on Marie, the knowledge bearer. That’s Sweden for you. I tell you, the only person that was shocked that incest was considered suitable content for 2-6yr olds, was the women sitting there with dual citizenship.

So yes, sitting at the foot of the massive ‘shooting’ painting – a technique whereby she placed encapsulated bags of paint under a layer of plaster which exploded when they were shot at and made the works bleed like wounded human beings – the kids sat still and were fascinated by everything. After Marie discussed the colour choices and the technique used, she did however feel the need to say, ‘but Niki the artist NEVER shot animals or humans and wouldn’t like that at all … she only shot at artworks … her OWN artworks.’ Good you cleared that up Marie. 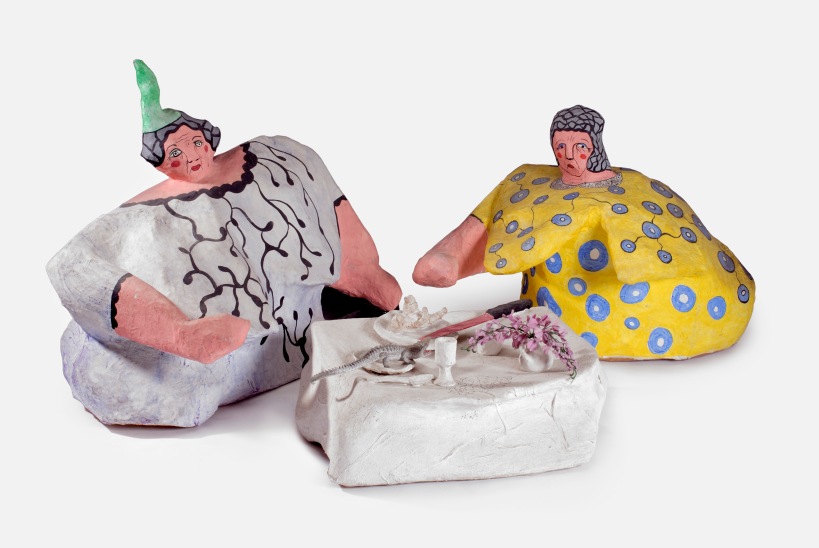 Then is was on to the sculpture ‘Devouring Mothers’. You can only imagine. “Ooo, is that a little naked baby on that plate?” asked the inquisitive Tilda, aged 4. “Yes it is“, replied Marie the knowledgable, “it’s right next to that bloodied knife ...” FUCK OFF. SHE DID NOT JUST SAY THAT. Yes, she did. More eye brows up, but only from me. She even pointed to it and the kids took a closer look. I thought I might have a heart attack. 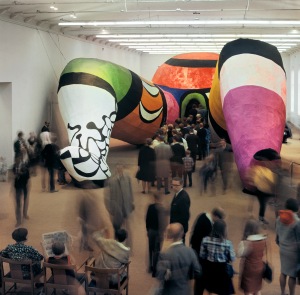 “SHE”. Image taken from when the sculpture was originally on display in the 60’s. It’s closed now, literally.

The final piece de resistance came from the small sections of and images from  ‘She: A Cathedral’, a highly controversial yet succesful monumental sculpture that had opened at the museum during the 1960’s.  The entrance of She: A Cathedral, we were told, was through the sculpture’s vagina. OH FOR THE LOVE OF GOD, OF COURSE IT WAS. And inside the sculpture were rooms such as a music room (stomach), a cinema, an aquarium (uterus), and a milk bar (breast) placed in appropriate places of the woman. Apparently, Niki de Saint Phalle wanted to really let the public into the woman’s body.  To understand and respect what the female body is and who/what a woman can be. TWO THUMBS UP FROM ME NIKI. I’ll gladly walk through a vagina any day, I only question whether this it’s appropriate content for young children, but that’s more a question for Marie and not you. I did hear little Sven aged 5 comment, ‘Pappa, that’s one big vagina‘.  TOO TRUE SVEN, TOO TRUE. I’m glad that’s your take home message. Luckily by this stage, the kids had had it and were all picking their noses, wandering off and only really interested in when they were going to get to paint themselves.

THANK GOD. NO MORE MASSIVE VAGINAS. It was then off to the painting workshop room where the kids all had a blast and I could sit down and gather my conservative self.

*All laughs aside, I thought Marie did tackle the content thankfully and in a way that the kids all loved and were absorbed by. The darker side of things went completely over their little blonde heads and I would definitely take Bubba back. I did find later in the day two paintings with a more positive note, that I will be suggesting to Marie for our next trip. Picasso’s oil painting The Guitarist or Matisse’s Apollo which were hanging just around the corner.

What’s made your eyebrows raise lately?