Summer Back in Sweden

Unless you live in Sweden and the thought of stepping into a long dark winter, without the smiles of a summer sun, leaves you sitting in a corner, rocking.

We are all happy Chekhov, but we HAVE noticed that summer is feeling more like winter.

So yes, we’ve been officially been on summer holidays for two weeks now, yet seem to be missing the summer part of it.

And the holiday part of it actually, as I am still working. My work day starts early and I’m finished around lunch, so there is plenty of time for afternoon adventures. One more week to go then I’m on holidays too.

Here are some vignettes from our summer so far:

The long road trip up

First stop: Our cute little lakeside cabin. We were surprised to find the restaurant was closed, we had no food and it was located about 4 hours in the wrong direction.

We decided to break the long drive (8 hrs) north up to our family country grounds, by driving 4 hrs then making a stop at a hotel. The next day, we’d only have 4 hours to go which would make life a bit easier for all.

We left on a Monday and drove through beautiful Dalarna arriving at a magic camping/hotel by a lake. We rang the parents to tell them we’d made it and we’d see them tomorrow. Well, image our surprise when they informed us that we were still 8 hrs away from them. WHAT? Google maps anyone? We’d managed to drive inwards but not upwards. Hashtag bum.

Finally, we made it to our country grounds. We are so blessed to have a series of little red houses out in the Swedish countryside. It is magic beyond words.

Every family member has their own house. There’s also a cabin for our other Aussie family member Tina Sparkles, a play cabin, one cabin for essentials in Sweden, fire wood and a general shed.  Hi-speed wi-fi, what could be better? The whole family can spend time together, but still be apart. No wonder we are so happy. The cousins are having a blast together, all six of them have a special bond. Teens, tweens and small children all could not be happier in each others company. Lovely to witness! 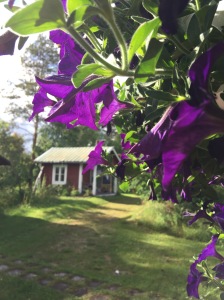 My favourite, the play cabin. Although the trampoline does seem to be winning.

Kitchen window view on the one day the sun was out.

Miss 7 said the other day whilst looking out at the downpour, ‘I wish it would rain donuts’. What a delightful thought I mused, as long as they were sugar-free.

And no wonder she was pondering this, she’s certainly seen enough rain of late. The weather has been shite. 12C and showers pretty much the whole time.

I brought up my new, totally awesome non-plastic, zero-waste popsicle molds with bamboo reusable/recyclable popsticks. They have nigh on not seem the day of light. They have not at all had a look in, too busy sitting in front of the fire.

The sun did peak out one night so we all jumped in the boat and had a golden fishing trip out on the lake. I want to pause these flashes of delight and remember them forever. 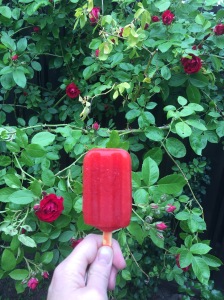 These would have been nice to roll out if they weather was in double digits.

Early this morning I was sitting around with The Swedish Husband having a cup of tea. He asked me what the date was, I replied it was the 22nd of July. ‘Well it’s our wedding anniversary then’, he replied.

11 years and still falling in love with the same man, many times.

He’s been putting up with me, legally, for 11 years. I’d follow him to the moon and back. Or Sweden.

I hope your summer/winter is treating you well!!!!!