Don’t choke on your coffee!

And my quill is at the ready!

After taking a break from blogging due to lack of time in May 2014, tonight, I had the sudden urge to write some more drivel, despite having even less time these days.

To be honest, I would’ve loved to have continued writing drivel all throughout 2014-2016, but life got in the way. We had the surprise baby and moved our family of five from Stockholm, Sweden to Sydney, Australia.

I’m working full-time, have a 2 + 4 + yr old, we are on the brink of major life change and it’s the busiest time of year. IT’S THE PERFECT TIME TO START A BLOG.

It was either that, or put away the laundry.

LouLou: Not much. We moved to Sydney and live on the Northern Beaches. I’m currently working as a home-based Marketing Manager. I’ve discovered that I’m highly allergic to tomatoes, chilli and waffles.

The Swedish Husband: Not much. I allowed him to follow us to Sydney. He’s mainly been taking care of our 3 girls among other things.

Bubba: Now an entirely delightful 6yr old who is loving life and Kindy.

The Flash: Our energetic 4yr old that exudes light and love.

The Surprise Baby: No longer a baby. A walking, talking, curly-haired ray of sunshine.

Every day they all show a little more sass, which we are hoping will one day help them run a country and not a gang in prison.

What can you expect more of? 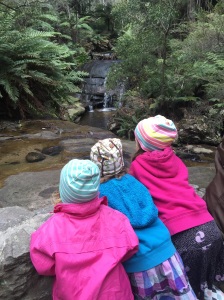 The three sisters at the Three Sisters. Blue Mountains, 2016

More of the life and times of Lou, such as:

♥ The time I was involved in a murder in the south of Sweden.

♥ The hijinks that TSH and myself get up to.

♥ The reason I should just buy shares in Apple and be done with it.

♥ There’ll be more pictures of our children where you don’t get to see their faces.

♥ There’ll be me banging on about Sydney, Sweden, sugar and our worthless attempts at a zero waste life.

♥ And follow along as I ‘konmari‘ the hell out of my life in an attempt to ‘spark joy’.

Hope to see you around!