“A world where there are a million different abilities, but no disabilities”

I attended the largest sporting even in the world for 2011. And I loved it. Who would have thought.

In June, 7,500 athletes with an intellectual disability and 25,000 volunteers came together to kick ass, achieve their personal best and give out a hell of a lot of high fives.

The opening ceremony was held in the historic open air Panathenaikon Stadium, the birthplace of the modern Olympics. A perfect Greek summer night, the air was heavy with nerves and anticipation, the stadium full. As the clear blue sky started to turn purple, I saw on stage Stevie Wonder, Vanessa Williams, Maria Shriver, Michelle Kwan, Yao Ming. I also saw my brother, Matt. He was representing Australia in bowling. Talk about proud. And as the tens of thousands of supporters erupted into a deafening cheer, I thought to myself, ‘special’ just doesn’t cover it. 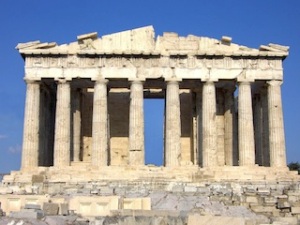 Founded by the late Eunice Kennedy Shriver, the Special Olympics sets out to break down the walls of discrimination and prejudice and to give those with an intellectual disability the chance to achieve their personal best on an equal playing field.

For all the athletes that competed, the road to the Olympics had been a long one with a selection process that started on a local, regional than national level. More training, more fund raising. Chatting to my brother prior to departure, he told me how excited he was to be finally leaving for Athens, it had been a long wait. He’d been busy with preparations. He’d just got back from lunch with Prime Minister Julia Gillard. I’m lucky to get a look in these days.