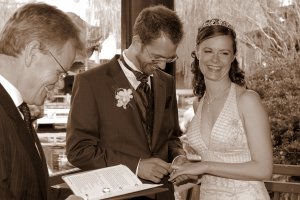 Still no baby! The contractions have slowed, I’ve slowed, the days are passing even slower. I hope all this slowness is in contrast to the labour, which I would prefer to be fast. We are off to the hospital for a check on Wednesday but they seem to think it is just fine to let it sit in there.

√ Have the grandparents down ready to take care of Bubba and in the meantime have them take care of all of us!

√  Have a husband on holidays who takes care of anything else the grandparents haven’t done.

√ Start to wonder if I should actually do something as all this idleness might not be helping to start labour.

√ Do stuff, but then get too tired so go back to the couch

√ Have been grateful to be pregnant with a healthy baby but am sick of being pregnant in equal measurements.

On Sunday we celebrated our 6th wedding anniversary. It would have been lovely to have the baby then but it seems it takes after its mother and is super lazy.

We were married on a beautiful winter’s day in Sydney surrounded by all our family and friends, including a gang of Swede’s who’d made the trip especially. Despite rainy weather in the morning, everything cleared up just like my brother had told me. “Sydney harbour looks best after some rain, it will be all fresh and sparkling” – turns out he was totally correct and we had a spectacular day; it was a stress-free, fabulous, wouldn’t-change-a-thing type of wedding. The marriage turned out pretty fabulous too.

What I received for our wedding anniversary:

This year I received a special combined birthday/wedding anniversary/you are having my second child/you are my hero type present which I am totally in love with. We spent a fantastic day investigating all the jewellery shops in Stockholm and finally found this…

What my husband received for our wedding anniversary:

On our first anniversary I decided that TSH would receive a special surprise every anniversary. I would reveal a secret to him about myself, a fact of information that he didn’t know about previously, despite our many years together. And this type of fact couldn’t be “Oh, by the way, for the last 6 months I’ve been shagging Brad from accounts…” it had to be a good surprise.

Yes, it’s a skill set he didn’t know I had. He knew I’d started playing cornet in the local brass band and then switched to trumpet but he didn’t know that prior to that, I’d dabbled for a short time in the woodwind section and could honk out a reedy tune with the best of them. 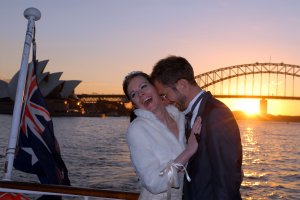 If you pushed me off this boat, I’d be able to swim.

Another secret skill! Apparently just because I doggy paddle and nearly drown when I am swimming in a Swedish lake in still waters, he was under the impression that I couldn’t actually swim. But get me into the open ocean or an overly chlorinated public pool and I’m a dolphin. Yes, the oxymoron that is Lou Lou!!! I have a phobia about putting my feet on the bottom of masses of still dark waters, so instead I just refuse to touch the bottom and cling onto him. However, at beaches or where the water is moving, or I can see the clear bottom, I turn into quite the little swimmer. This was discovered on a trip to Greece where I dove off a sailing boat and did some acrobatics in the crystal clear Mediterranean waters. He was like, “Where is my wife?” and I’m like, “200 metres over here, aren’t you going to catch up?”.

Between 2008 + 2009 my taste buds had grown up and I thus informed him that my ‘Don’t ever put horseradish in anything you cook for me’ was now ‘Bring it on’. He was very surprised by this announcement.

Confucius says “Your wife will one day produce a mega baby”

I’m scared of the dark. I don’t put my feet on the bottom of lakes. I don’t pee in the woods. I’ve been known to want to call emergency services over a bee sting. All in all, I openly admit I am a bit of a wuzz bag. However, the only time in my life when I have been brave was at the birth of my daughter. God yes, I had the good drugs of course but towards the end and the pushy-pushy bit was done au natural. Just short of our 4th anniversary I was able to surprise him again. YES! He said that he’d been so impressed with my efforts that he had fallen in love with me all over again. Well, the baby was pretty cute too, so I think that helped also.

Yep, got him again. Surprise! Not only can I ride a bike but I can pop a wheely too. Give me the right bike and the right conditions, and I turn into Nicole Kidman in BMX Bandits. Up gutters, down gutters, scratching parked cars, I can do it all.

Well for the last few months I have been sus about how much TSH reads or pays attention to my blog. He does read and have pre-approval over all posts that include him or our daughter, but other than that I had a feeling that he doesn’t ‘read’ my blog as much as he says he does. Turns out, he didn’t know I was on Twitter even though it is clearly marked on my webpage. Surprise!!!!

So, even though I receive diamond encrusted antique jewelry he receives an interesting factoid – and you can’t put a price on knowledge – so I think we all know who wins in the end.

What has been the best anniversary gift you have received?