In my quest to become the world’s laziest stay-at-home mum, I’ve set upon trying to automate our lives. At the moment I’m very into anything that can make my life easier and I’m good at putting that notion into motion. For example, recently I’ve been trying to go paperless with our household bills and have been setting up auto payments and e-invoices trying to get away from receiving mail and having to get off the couch.

And as we don’t own a car, doing the grocery shopping can be a bit of a pain. A double pram on the bus plus a million shopping bags? Let’s not be ridiculous, that just sounds like a whole lot of time away from watching the Real Housewives of Beverly Hills. I’ve managed to find a company that delivers our groceries to our home for a reasonable price and if you can take delivery during the day it can cost as little as 39SEK.

The best discovery, however has been www.ekolådan.se (eco box) a Swedish company that delivers ecological produce to your door. This is very much inline with the precious eco system we have within our house (which we shouldn’t mess with) whereby I organize fresh and delicious produce and voila, TSH turns it into rather fabulous meals.

Every other week we receive a box of fruit and a box of beautiful seasonal Swedish veggies, for about 420 SEK/ 63AUD/65/USD. They deliver on Friday’s however on the Tuesday before we receive an email about what produce we will be getting so you can always plan ahead.

We love eating following the seasons. I can remember a time  – a long time ago – when one would go to the supermarket and only have seasonal produce on offer. Now, what type of crazy is that? Having certain things available to you only at certain times of the year! ha ha Mother Nature, what for the love of God are you going on about. But now with modern food processing and worldwide distribution, most fruits and vegetables are available year-round, with supermarket produce all looking the same in February as it did in September. And I have to say, if you live in Sweden that produce, most of the time, isn’t looking all that good. Unless it comes in a box from Ekolåden.

How good do these look?

It’s the middle of winter here and thus seeing the sun is a rarity, so I’m always wondering if my order of ‘Swedish only produce box’ is going to turn up empty. Alas not, the Swedes seem to have adapted to their land and at the moment we are enjoying winter root vegetables that warm the heart. This week we received carrots from Anders & Maria Östlund in Åsbro, onion and beetroot from the Wålstedts in Dala-Floda and celeriac from Åsa & Magni Gustafsson in Hulte. Great work Sweden! 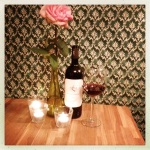 I was in charge of atmosphere

Last night TSH whipped up a treat for us, roast pork with winter vegetables and dash of béarnaise. Totally delicious! Then I whipped his butt in Scrabble. O.K, I didn’t exactly whip his butt as it was a fairly even match but I did win and that’s my point. We played our usual house rules – we play in both Swedish and English with double points for rude words. There was the usual ‘discussions’ about whether one was ‘just checking’ a word in the dictionary or outright searching for words in the dictionary and of course, my mathematical skills of addition were called into question. I claimed to be put off by the very modern Swedish version of the game we were playing with its inclusion of ‘arrows’ which allow words to turn corners whilst TSH claimed to be put off with my incessant questioning of ‘is this a word in Swedish? or in any other language around the world?’ But in the end, beauty won over brains and I was declared the winner. Winter weekends. I love them!