The Dragon has spoken

Happiness has arrived along with a blogging award! I was recently nominated for a Kreative Blogger Award by fellow expat blogger KimTalksBooks. Kim writes about all things literary and has recently released her book on amazon. The Melanie Chronicles  is about love and life and what happens when you mix it up with both.

Well in the Year of the Dragon, you can imagine how excited I was to be deemed officially creative. Thank you Kim!

So now according to the rules, I must thank the person who nominated me √ tell you 7 things about me that you might find interesting √and then nominate 7 other bloggers √.

7 things that you may or may not find interesting about me:

1. I can play the clarinet. Yes before I started on trumpet, I had a year or two in the woodwind section of the primary school band and can in fact, honk out ‘Anchors Away’ with the best of them.

2. I’ve been married for nearly 6 years but still could not tell you how my husband prefers his coffee. Milk? Sugar? I don’t have a clue. I’ve made plenty of cups for him over the years,  I just don’t pay much attention. I tell him this keeps things ‘fresh’.

One of my favourite TV shows in The Goodies and I would die to own a Goodies tricycle.

4. I’ve managed to catch chicken pox. Apparently I am not part of the 95% of adults whom caught it when they were kids. Instead I waited until I was 28 weeks pregnant. My sister in law calls me ‘unique’. My husband calls me ‘special’. 1 -7 in 10,000 pregnancies have the pox. From foxy to poxy in one fowl swoop.

5. As a youngster I was in awe of the fabulously smart Claire Huxtible (a lawyer) of the Cosby Show and thought Elaine Benes (copywriter) from Seinfeld was hilarious. Later on I studied law at UNE at the same time as working as a copywriter. I think I watched too much TV as a kid.

6. I’ve made up my own language. I use English grammar + some badly pronounced Swedish words and voila – I can speak “Swedish”. It’s just not the ‘Swedish’ that everyone else knows or that is recognised by any government, but I am trying to get it EU approved.

7.  I love anything to do with crafting or sewing. Buttons, reels of cotton, sewing machines, vintage patterns, colourful balls of pure wool, cardboard. But that’s where it stops. I’ve never picked up a pair of knitting needles in my life. I don’t know what knit one, pearl one means and I can’t even darn a pair of socks, I just throw them out and steal another pair of my husbands.

And here are my nominations for 7 other blogs: 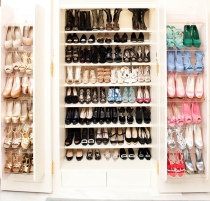 ♥ Direct from London, Rachel Phipps writes about all things stylish. She recently posted about shoe storage and I fell in love.

♥ In Search of a Life Less Ordinary a very well written expat blog from my hometown Sydney.

♥  Crash Test Mummy Ready to get organised? About an Aussie mum who crash tests everything from the world wide web.

♥ Jen Loves Kev one of the first blogs I started to follow. This chick is always coming up with creative meals + fashion or craft. Beautiful photography included.